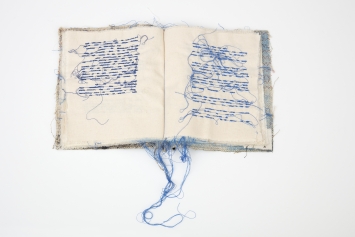 We are pleased to announce the exhibition A Lover’s Discourse: Fragments; the title is taken from the famous book by Roland Barthes. The exhibition evolves around the idea of 'fragment' and brings together artists of different generations and various backgrounds. The 'lover’s discourse' is the gallerist’s love for their work.

It begins with two historical Italian artists: Maria Lai (*Ulassai 1919-2013) and Gianni Colombo (*Milan 1937-1993) representing the esprit de finesse and the esprit de geometrie. Unanimously considered one of the most important Italian artists of the 20th century, Maria Lai will be present with embroidered book pages. Her artistic practice spanned different media including weaving, embroidery, sculpture, drawing and writing: each of her works carries the echo of an ancestral relationship that evokes the dawn of narration and poetry. Gianni Colombo, one of the leading figures of international kinetic art, explored the possibilities of movement in the work of art, placing the spectator and his perceptions at the center of his research. Chung Eun-Mo (*Seoul 1946), Korean painter who lives in Italy since many years, embraces the rooms with the geometric planes, modulated colours, and transparent layers of her paintings.

In the space we will show Claudia Losi's (*Piacenza 1971) ceramics from the Gesti Dentro series, composed by vases that collapsed while they were still soft, with an ultramarine glaze inside, that evokes the waves of the sea. Terracotta is the material of the sculptures by Federico Tosi (*Milan 1988) representing objects, situation and entire houses suddenly swept away by a violent wind, while a different type of wind makes trees hover in the dreamlike images by Rä di Martino (*Roma 1975), an artist whose research is based on the investigation of the filmic language and the relationship that is woven between cinema, its myths and collective memory.

The British artist John Stezaker (*1949, Worcester) constructs new worlds, variants, transformations with fragments of photographs collected over the years from mass media. Linda Fregni Nagler (*Stockholm 1976) deconstructs and then recreates the photographic image, magically making its history emerge. The works in the exhibition contain a cross-reference of translations from photography to drawing, finally returning to photography: the prints thus retrace the path from drawing to the invention of photography itself in the 19th century.

Benjamin Senior (*1982), the only figurative painter in the exhibition, represents complex scenes of contemporary urban life using the ancient technique of egg tempera, with luminous and transparent colors. 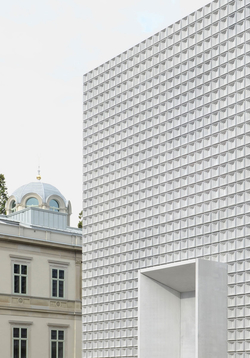 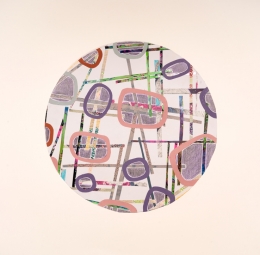