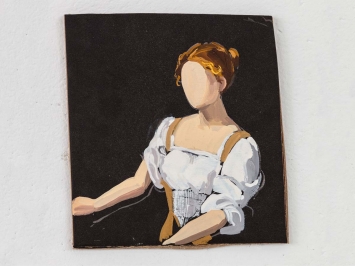 In the Project Room we present a work by Gideon Rubin composed by 25 small paintings made on scraps of cardboard: a twist the artist employs next to his works on canvas, creating tiny portraits, whose subjects range from historical masterpieces to more current celebrities.

Rubin has a surprising ability to distill an image to its essence. Even with the features invisible and the contextual details omitted, we are often struck by the recognizability of the models, by how an attitude, a hairstyle or a garment offer enough clues to reveal an identity.

In Rubin’s work the history of art and that of popular culture intertwine so smoothly as to defy any sense of ranking. Images from the 17thcentury and the present era are rendered in the same visual language and the same delicate brushstrokes, creating a sense of universality and timelessness. Alongside the youths and divinities of Caravaggio or the nobles of Velasquez, he depicts today’s personalities, captured on magazine covers or across the Internet. We can thus observe the renowned Amor vincit omnia in between Beyoncé and Sean Connery, Bacchus and the Lute Player together with Amanda Gorman, photographed as she reads her now famous poem during the inauguration ceremony of Joe Biden.

The contrast between the roughness of the surface and the elegance of the brushwork creates a push-pull tension between the present and the past, the disposable and the lasting, high art and commerce, the casual sketch and the painstakingly precise depiction.

Gideon Rubin was born in Tel Aviv in 1973; he is the grandson of the Israeli painter Reuven Rubin, a Romanian who moved to Israel to escape from the Holocaust. Gideon studied at the School of Visual Arts in New York and then at the Slade School of Fine Arts in London, where he completed his education in 2002 and presently resides. His work has been shown in many solo shows around the world, and is included in private collections in London, Hong Kong, New York, Paris and elsewhere. 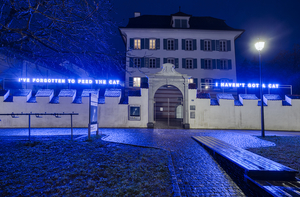 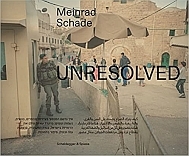