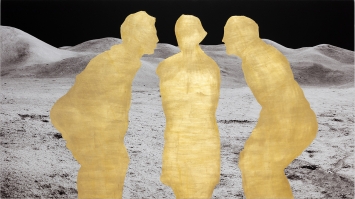 In a time like ours, marked by confusion of values and acceleration, even many of the myths and mythologies that have always marked and influenced our perception of the universe – known or simply imagined – have lost value, forgotten or weakened in their impact, altered in their meaning, scattered in a multiplicity of signs in which it is increasingly hard to see our own image. Something, however, has survived to foster our sense of myth; more ancestral events or those belonging to a recent past are still capable of resurfacing in a more or less conscious way, of establishing a common, universal perception. One of them is undoubtedly the landing on the moon in July 1969. That experience – on the crest between modernity and postmodernity – has represented and still represents the dominion of the unknown, the supremacy of human reason over chaos, the tangible grasp of what had shortly before represented the most distant of exotic presences. Then as now.

In this new series of works Rä di Martino – in continuity with her previous projects linked to the landscape and to collective mythologies formulated by the film and television industry – investigates and reworks precisely this scenario, that of the moon, returning it to us in an unprecedented and unexpected light.

The landscapes represented in the works of the exhibition no longer frame an epic conquest that projects us into a vividly imagined future, but instead describe a domestic, everyday, easy-going reality. The myth is thus renewed: on the one hand, its simplicity and immediacy are enhanced, exalted as the epicenter to represent and convey calm, aspirations of normality. On the other, the Allunati (Moon-Landed) – the heroes of this undertaking conceived by the artist, giving the show its title – are lacking in armor and therefore emptied of their epic, their superlative otherness. They are rather characters in which every somatic trait and every specific physical resemblance have been erased, figures in the enactment of simple activities perceptible to all of us, attitudes in which anyone can picture themselves. To enhance and empower them, taking them to another plane with respect to that of human beings, there are the applications of gold leaf, filling the anonymous silhouettes. The normality of the subjects represented and the calm of the lunar landscape correspond to our present needs, describe the necessity and hope of a more peaceful and approachable future, in antithesis to the complexity and intelligibility of our present. Moonstruck today, Moon-Landed tomorrow.

Rä di Martino (Rome, 1975) studied at the Chelsea College of Art and the Slade School of Art in London. She then lived in New York, from 2005 to 2010; she now lives and works in Rome. She has shown in institutions like the Tate Modern in London, MoMA PS1 in New York, Palazzo Grassi in Venice, MACRO and MAXXI in Rome, Museion in Bolzano, MCA in Chicago, Hangar Bicocca and PAC in Milan. Her first feature-length film “Controfigura” (2017) was premiered at the Venice Film Festival in 2017. In 2018/2019 she developed the project AFTERALL, with the support of the MIBAC - Italian Council Award, in collaboration with Fondazione Volume: the first exhibition was held at the Mattatoio in Rome in 2019, the second at Kunstmuseum St. Gallen in 2020. In October 2020, the video “L’eccezione” was presented at Museo Novecento in Florence, an exhibition curated by Sergio Risaliti. 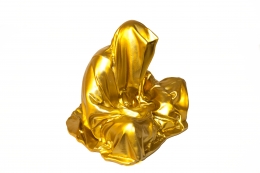 GUARDIANS OF TIME by Manfred Kielnhofer