The Instrument of the Horizon / The Score of Glances 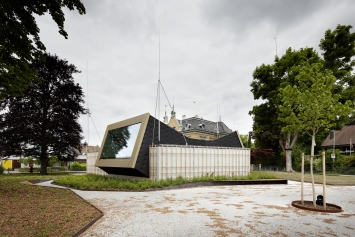 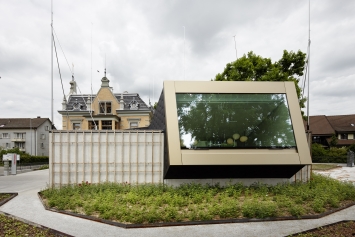 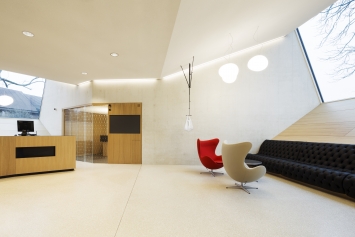 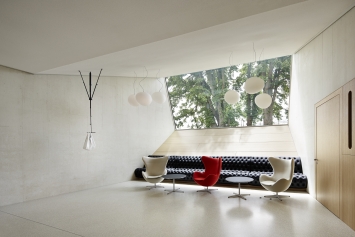 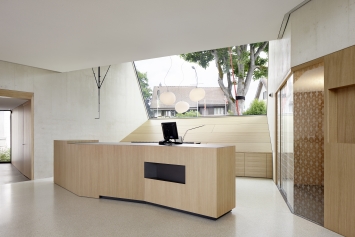 Yves Netzhammer, "Das Instrument des Horizontes / Die Partitur der Blicke" (The Instrument of the Horizon / The Score of Glances), 2013, service hall in the annex building, view of the red story pole tied to the tree trunk with a rope ©Ralph Feiner 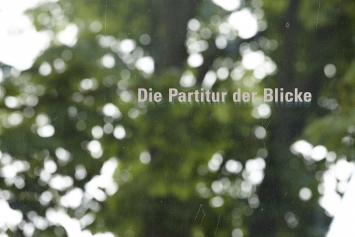 The Instrument of the Horizon / The Score of Glances

Something new is planned here and change is imminent. Story poles rise above the Art Nouveau "Villa Rosenheim" and the newly attached annex. They mark off the impressive volume of a new building. It will be big, bigger than the existing structure. Is this in keeping with the construction and zoning regulations?

The planned redesign is also evident in the bank's new service hall. Two scaled down story poles are affixed to the ceiling, the outline markers point downwards, the corner angles protrude into the room. The rods are aligned with the exterior story poles by means of the two wide panoramic windows. But these shafts mark a floating space. The displayed building is imaginary. It is the idea of a building; a castle in the air, so to speak.

With this architectural intervention, the artist Yves Netzhammer latches onto the coexistence of the old and the new building, while pointing to a future structure. The Diessenhofen branch thus consists of three construction phases. Phase 1: the past, the old "Villa Rosenheim" built in 1900; Phase 2: the present, the annex building erected in 2013; and Phase 3: the future, a superstructure depicting the demarcated building profile. Tradition and openness to new ideas appear united.

Planning is a constant of human nature. Time brings new building projects. To begin with, projects are approximate ideas that increasingly gain shape until they are executed as faithfully as possible according to the designs. The red story pole, tied to the tree trunk in a makeshift manner using rope, portrays an initial, vague idea. In contrast, the silver metal rods screwed onto the roofs provide more accurate details. The black story poles in the service hall are already part of the definite idea. In the perfectly designed interior, the surface of which is only interspersed with precisely placed joints, these fine building profiles become part of the linear network. Frameless glass surfaces float above this smooth interior. Etched in delicate letters in the panoramic window facing the treetops and the sky are the words Die Partitur der Blicke (The Score of Glances),and Das Instrument des Horizontes (The Instrument of the Horizon).

The guided gazes and the extended conceptualisation in the stylish room are brought back down to earth by means of a white plastic bag. Hastily hung on a story pole, it appears to have been forgotten and testifies to the banal daily difficulties involved in the creative process. Made of white injection moulded aluminium, it is cast like the black raven on the building profile in the garden, a tongue-in-cheek reference to a greater order, within which every project must fit.

Building profiles are part of the official building permit procedure. For Yves Netzhammer's intervention the responsible authority issued a limited permit for periodic temporary assembly. The artwork is regularly dismantled and placed into storage.