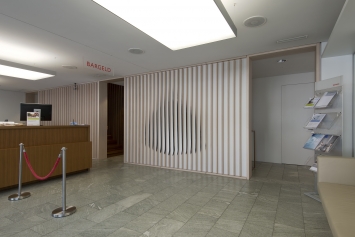 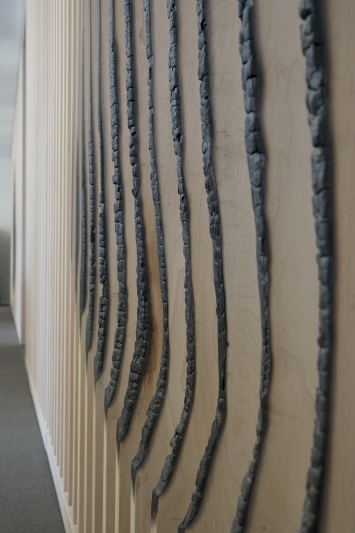 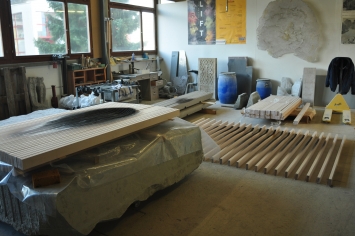 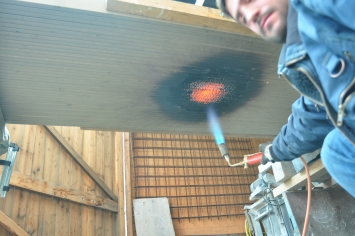 Kilian Rüthemann, burning of the slats pushed together to form a flat surface panel

In the service hall at the Raiffeisen branch in Embrach, a large burn has "eaten" into the light slats on the longitudinal wall. Alternating bands of light and shadow cast by wooden strips arranged in vertical rows make the whole wall dance. The round stain vibrates within it like a black sun, its corona of smoke deposits and scorch marks shimmering like a halo. The artwork "Brand" (Fire) by Kilian Rüthemann (*1979) is simultaneously minimalist and brutal in appearance. In the singed wood, the aesthetic appeal of the burn mark contrasts with the destructive force of fire, and the robustness of the structure with the vulnerability of the material; an illustration of the paradoxical beauty of destruction.

For his art intervention, skilled stonemason Kilian Rüthemann seized upon a recurring element of architectural design: the slats. Explicitly defined as a possible intervention site, these slats feature in the ceiling structure of the distinctive wooden porch at the front of the commercial premises located in the renovated 70s apartment block. They also dominate the interior of the customer hall and the open-plan offices on the first floor as acoustic elements. The first small burn mark greets visitors above the entrance, then in the service hall, the monumental burn mark described above faces customers and repeated in duplicate on the upper floor accompanies the office employees through the day.

For the execution of the archaic medallion, Kilian Rüthemann used a flame burner and directed it at the center of the slats, which had been pushed together to form a flat surface panel. In a process best described as controlled chaos, he directed the fire intuitively over the glazed and drilled wooden slats that were ready for final assembly, and had been produced in duplicate as a precaution. During this process, the grey stained, weather-resistant exterior spruce slats exhibited different burning properties to the white stained, highly grained interior ash slats. To ensure that the burns spread in line with their architectural context, the artist worked on the panels in their intended alignment: the timber above the entrance lying horizontally from the bottom up, and the timber for the walls standing vertically. Using a pressure washer and a steel brush, the loose ash and coal was then eroded away. Final coating prevented charcoal particles or the burnt smell from entering the bank's rooms. 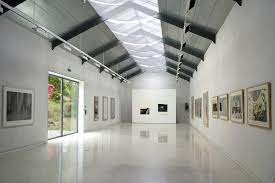 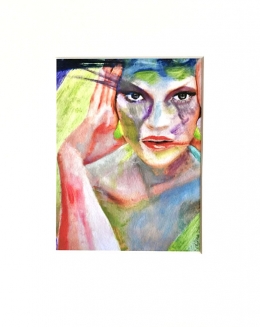