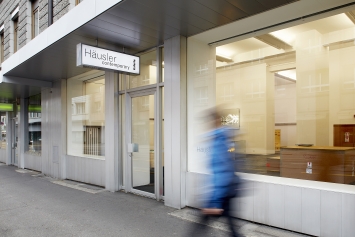 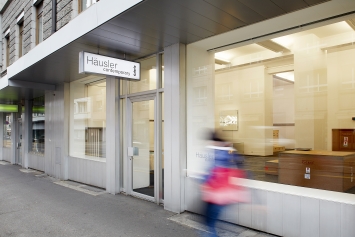 Ever since 1989 Wolfgang and Christa Häusler founded their business in Bregenz, they have been presenting, promoting and selling contemporary conceptual sculpture and painting. While they first focused on supporting corporate collections, they increasingly shifted the emphasis of their activities to gallery work when they moved to Munich in 1992. With personal commitment and passion, surrounded by a competent team, they now advise collectors, curators, trusts and art enthusiasts from all over the world.

In two galleries in Munich and Zurich (since 2007) and in an exhibition space in Lustneau (since 2013), Häusler Contemporary presents established and younger international positions, such as James Turrell, Keith Sonnier, David Reed, Judy Ledgerwood, or Craig Yu. The program comprises famous names of the Post Minimal era as well as other important representatives of from this period that temporary had lacked public attention. For example, the gallery successfully encouraged the rediscovery of Bill Bollinger or Gary Kuehn.

Furthermore Häusler Contemporary commits itself to publishing books on the gallery artists and to support companies in projects of art in architecture. Keith Sonnier’s light work for Munich Re in Munich, Hamish Fulton’s wall painting for Schloss Hohenkammer in Bavaria, or James Turrell’s light installation for the new chapel at Dorotheenstädtischer Friedhof in Berlin are projects that were realized in collaboration with Häusler Contemporary. 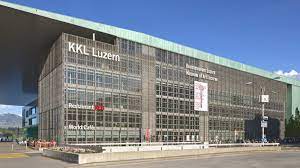