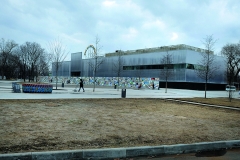 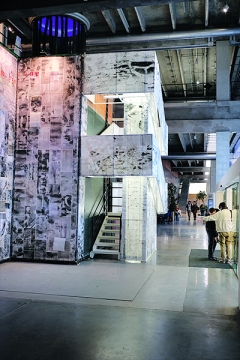 Garage is spacious posh loft 3 floor space for contemporary art which is en vogue here in Moscow. It is situated in the Central Gorky park pretending to be a museum yet without permanent display. For the last 3 years it is hosted in the remains of a modernist industrial canteen called «Spring», dating from 1960-s, re-arranged by Rem Koolhas by packing it in beautiful polycarbonate container. It was initiated by Dasha Zhukova and financed by her husband Roman Abramovich, Chelsea owner, oligarch and former Chukotka governor who grabbed his fortune by selling his oil company to the state when the stakes were high. To say the truth during years of existence Garage organised and brought to Moscow a significant lot of exclusive art events which gained the attention The Triennial is commissioned by Kate Fowle - Garage chief curator - and is as never before devoted to Russian contemporary art based in its regions.  Some 70 artists show their works in 7 thematic clusters called «directories», each supervised by it’s own curator.  For example Ekaternia Inozemtseva depicting the concept of «personal mythologies» refers to Harald Szeemann’s concept of «individual mythologies» introduced at Documenta 5 in 1972. It helps her to speak about hermetic yet spacious worlds of Vladimir Archipov, who works with Soviet DIY «born of necessity» design objects, semi-primitive wooden monuments by Alexander Povzner or Pavel Pepperstein’s rondos, created by «Picasso, resurrected by Russian cosmist Nikolai Fedorov». The real foundling of this directory is Nikolai Panafidin an inventor of sophisticated mechanisms who works at  the candy factory in Chelyabinsk. Magnificent installation from Nizhnij Tagil trash by Vladimir Seleznev also comes from the middle of Oural region. Every 2 minutes when the light turns off the trash field turns into the night cityscape of Nijni Tagil - the artist’s fatherland. This work belongs to the «fidelity to the place» directory curated by Andrei Miziano. The locally important Kazan artist Ilgizar Khasanov who is in his late sixties now became one of the «master figures» as the late Dmitry Prigov and Anatoly Osmolovsky who portrayed himself as the hierarch of contemporary art cast in bronze and plated with gold. Contemporary art market never existed in Russia. The Triennial fixes this situation -  it is declared as a humble research project dedicated to open Russian contemporary art scene for international audience. The only fear about it is that without galleries or almost any state support the contemporary art all round Russia is created by enthusiasts and its layer is really molecular thin. So, the triennial operates with sort of a membrane shell which is very fragile and based on personal connections. But before it blows away you can inflate this glamorous bubble and have fun with it. Which is in fact very Russian.